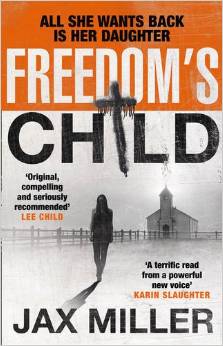 Already released in the US on 2nd June, Jax Miller’s Freedom’s Child is out in the UK and Ireland on 30th July! Described as

‘A terrific read from a powerful new voice ‘ Karin Slaughter

Jax spoke to writing.ie about how she wrote her sensational debut, a book that was the talk of the London Book Fair in 2012 – click here to read more.

Find out how Inkwell helped Jax get her deal here.

And here’s the blurb:

A heart-stopping debut thriller about a woman named Freedom, who will stop at nothing to save the daughter she only knew for two minutes and seventeen seconds.

Call me what you will: a murderer, a cop killer, a fugitive, a drunk…

What they don’t know is that Freedom is not her real name. That she has spent the last eighteen years living under Witness Protection, after being arrested for her husband’s murder. They don’t know that she put her two children up for adoption, a decision that haunts her every day.

Then Freedom’s daughter goes missing, and everything changes. Determined to find her, Freedom slips her handlers and heads to Kentucky where her kids were raised. No longer protected by the government, she is tracked by her husband’s sadistic family, who are thirsty for revenge. But as she gets closer to the truth, Freedom faces an even more dangerous threat.

She just doesn’t know it yet.

Freedom’s Child is in bookshops now or pick up your copy online here!