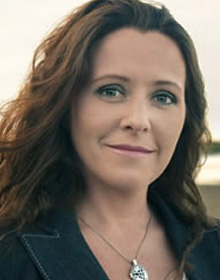 Arlene Hunt is a unique voice in Irish crime fiction. Her dark and atmospheric stories perfectly capture the grimy underworld of Dublin and beyond. She began writing at the age of 27, and produced her first novel, Vicious Circle, within the year. This book was eventually published by Hodder Headline at the end of April 2004.

Her second novel, False Intentions, introduced two characters, John and Sarah of QuicK Investigations, who were set to become a regular part of Arlene’s work, and was published in May 2005. Her third novel Black Sheep was published in June 2006.

Arlene’s 4th novel, and the third in the John and Sarah series, is called Missing Presumed Dead (MPD) and was published in June 2007. It was translated into Dutch and is available under the title ‘Vermist’ and is due to be published in Russian.

Her fifth novel, the fourth QuicK Investigations book, is entitled Undertow and was published in Septmber 2008. It was nominated for Best Crime Novel at the 2009 Irish Book Awards.

In 2009 Arlene completed her 6th novel, Blood Money, which was published in March 2010. It continues the QuicK Investigations series. Her 7th novel, ‘The Chosen‘ was published in October 2011 to great critical acclaim.

Arlene has contributed to various anthologies, including Down These Green Streets – edited by Declan Burke, Requims for the Departed – edited by Gerard Brennan, and Moments – a book to raise money for the Asian tsunami. An avid reader, Arlene  enjoys the works of Robert Crais, George Pelecanos, James Ellroy, James Lee Burke, John Connolly and others and is represented by Faith O’Grady of The Lisa Richards Agency.

In 2011 Arlene founded Portnoy Publishing with her husband to publish a boutique list of fiction and non-fiction including her own sensational thriller, TV3 Book Club choice The Chosen.