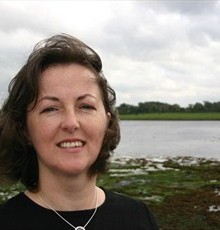 Marie-Louise Fitzpatrick is a multi-award winning picture-book author and illustrator, three-times-winner of the Bisto Book of the Year, in 2001 for You, Me and the Big Blue Sea, 2003 for Izzy and Skunk and in 2010 for There.

Author and illustrator Marie-Louise has also won the 24th CBI Book of the Year Award (2014) as well as the Honour Award for Fiction for her novel Hagwitch. Moving between 16th-century and modern-day London, Hagwitch draws on ancient folk superstitions and the magic of the stage tradition to craft a haunting tale. The judges said, ‘Fitzpatrick brings the reader on a journey down a canal, through a world of theatre and puppetry, and into a realm of magic and mystery. This expertly-crafted novel, with its meticulous attention to detail, seamlessly interweaves the two narratives of present-day Lally and sixteenth-century Flea.’

Find out more about Marie Louise at her website: http://www.marielouisefitzpatrick.com/