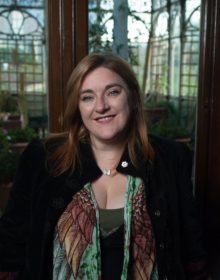 Ruth Frances Long writes young adult fantasy such as The Treachery of Beautiful Things (Dial, 2012) and The Dubh Linn trilogy set in the world of demons, angels and fairies that exists alongside our own in modern day Dublin (A Crack in Everything (O’Brien, 2014) , A Hollow in the Hills (O’Brien, 2015) and A Darkness at the End (O’Brien, 2016)  .

In 2015 she was the winner of The European Science Fiction Society Spirit of Dedication Award For Best Author of Children’s Science Fiction and Fantasy for A Crack in Everything.

As Jessica Thorne she writes fantasy and space opera romance – The Queen’s Wing (Bookouture, 2018) and The Stone’s Heart (Bookouture, 2019), which was shortlisted for the RNA Fantasy Romantic Novel of the Year Award in 2020, and the Hollow King Duology Mageborn (2020) and Nightborn (2020).

As R. F. Long she writes fantasy & paranormal romance such as The Scroll Thief, Soul Fire and the Holtlands stories (The Wolf’s Sister, the Wolf’s Mate and Songs of the Wolf) which were originally published with Samhain publishing and which she recently re-released along with the full-length, final part of the series The Wolf’s Destiny.

She lives in Ireland and works in a library of rare, unusual & occasionally crazy books. But they don’t talk to her that often.

One to One Mentoring

“I can’t thank you enough for putting me in touch with Ruth.  She has helped me so much.  I have wanted this kind of help for so long, feeling if I could just talk through some of the sticking points with my story and get some help with the story shape I would have a story worth writing.  For the first time in years I feel I can relax and enjoy the writing now instead of being stressed and putting pressure on myself because I didn’t really know where the story was going.
Ruth has absolutely revolutionised my writing. Thank you once again,
Jo”