From being made redundant to star blogger and freelance journalist, Hazel Gaynor explains how The Inkwell Group have helped her pursue her writing dreams.

In February 2009 I was floundering following redundancy. Exploring options for a new career, I attended an Inkwell Writing Workshop: Writing for the Web. I didn’t know what to expect, but came away inspired and immediately set up a parenting blog, ‘Hot Cross Mum’. Within a year of attending that workshop, I had an award winning blog and a successful freelance career, writing for publications and websites in Ireland and the UK, including Hello Magazine.

Yet, I still harboured a dream to be a published author, so I began to write my first novel. I really didn’t have a clue what I was doing! Vanessa at Inkwell was a great help, offering advice, support and encouragement and, when I was ready, putting me in touch with an agent. While that novel attracted interest from several publishers, it didn’t lead to a publishing deal.

Disappointed, but undeterred, I attended another Inkwell workshop: ‘Women’s Fiction’ with Sinead Moriarty and Monica McInerney. This proved extremely valuable in helping me figure out what it was I wanted to write, and how to go about it. Sinead and Monica also provided some great insights into the reality of a career as a writer.

I wrote a second novel (the first draft of which was written during NaNoWriMo in November 2010). I signed with an agent in London, and began working on rewrites of that novel. But as I completed those rewrites, something was nagging at me. I’d always wanted to write historical fiction, but had never felt confident in my abilities to do so. The nagging wouldn’t go away and neither would the spark of an idea to write a novel set around Titanic. I finished the rewrites and started researching Titanic. By the end of the summer of 2011, I had written the first draft of THE GIRL WHO CAME HOME. I knew this one was different, but I still had a long way to go. 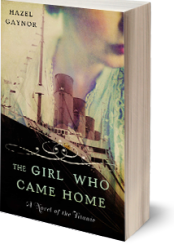 After initial rejection from publishers and plenty of tears, I self-published the novel in March 2012, to coincide with the Titanic centenary. It proved to be a great success and a year later, it caught the attention of an agent in New York. In June, 2013, I signed a two-book deal with William Morrow (HarperCollins). THE GIRL WHO CAME HOME – A Novel of the Titanic was published across America, the UK and Ireland in April 2014. My second novel, DAUGHTERS OF THE FLOWERS – also historical fiction – will be published in early 2015.

From delivering inspiring workshops, offering practical advice, and putting me in touch with some excellent resources and contacts, Vanessa and Inkwell really started my writing career and have continued to support me as my dreams have become a reality. I am now proud to call myself a published author and couldn’t be happier, doing a job I love. Although the road to publication was, at times, a bumpy, frustrating and lonely one, it was all completely worth it! I’m excited to see where things go from here.