Any Dream Will Do for Maria 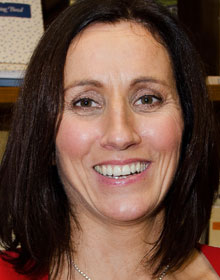 For as long as she could remember, Maria Duffy dreamed of writing a book and a phone call to Vanessa O’Loughlin at Inkwell proved to be the most important of her life. Here she shares her story…

Let me just take you back a few years to when it all began.  For as long as I can remember, I’ve dreamed of writing a book.  But working full time in the bank and subsequently having four children, meant my life took a different route.  It was only when my youngest started school three years ago, that I began to emerge from the haze of domesticity and decided to pursue my writing seriously.  I began to write that book that had been burning inside me.

That’s when I made what would turn out to be the most important phone call of my writing life.  Not knowing anyone in the writing or publishing business, I searched online for help for writers and came across a site called Inkwell Writers.  I hugely lacked in confidence and felt that nobody would take me seriously because I didn’t have any degrees or qualifications, so it took me a while to pluck up the courage to make the call.  When I did, I spoke to Vanessa O’Loughlin, who runs the site, and she spent an hour on the phone encouraging and advising me – she basically took me under her wing.

A few months later, I attended one of Inkwell’s ‘Getting Published’ workshops and as well as learning a huge amount about the business, I made some invaluable contacts.  At that stage, Vanessa encouraged me to join twitter, telling me that it was vital for writers to have an online presence.  I hated the thought of it, but I tentatively dipped my toe in.  A few weeks and many hundred tweets later, I was addicted!  I found twitter liberating.  It was a place I could be myself and not have to worry about big words or elaborate descriptions.  I was now writing my book by day and tweeting by night!

Over the next year, I had some publishing success when I had two short stories published in anthologies – one here in Ireland and another in America.  But I still yearned after having that novel with my own name sitting on shelves of bookshops.

One day, in September 2010, I received a message on twitter that almost made me fall off my chair!  It was from Sheila Crowley, a literary agent with the prestigious Curtis Brown in London.  I’d met Sheila at various workshops I’d attended and knew she represented some of the biggest names in women’s fiction in Ireland and the UK.  She wanted to meet me.  Sheila Crowley wanted to meet me!  I hadn’t sent her any of my writing so I was intrigued and excited about why she might want to meet.  It turned out that she thought I had a fantastic voice on twitter and she told me that if I could channel that voice into a novel, that I’d have something special.  She told me to go off and write a few chapters of something contemporary and send them to her.  Now that’s an offer every writer dreams of!

That’s when Any Dream Will Do was born.  I began to write, with her advice in mind, and the words just flowed.  Sheila had given me permission to just be myself and I loved it.  She signed me up shortly after that and I had the book finished before Christmas.  I worked on it again for the next few months and it went out to publishers in April.  Just a few short weeks later, I began to see my dream come to fruition when Hachette Ireland offered me a two book deal.  I needn’t tell you, the shouts of joy could be heard right around our street!

On 8th November, just seven months after the book was bought by Hachette, Any Dream Will Do was launched to a crowd of more than a hundred people in Dubray Books in Grafton Street in Dublin.  It was an amazing night and one I’ll never forget.  It was a sort of weird but lovely ‘fiction meets reality’ night as Keith Barry, Irish illusionist, who features in the book, did the honours of launching it.

Now, a few weeks later, I still walk into book shops and want to cry with joy as I see my precious book sitting up in pride of place on the shelves beside some of my favourite authors.  And what’s more, I’m delighted to say that it even hit the top ten in the Irish charts for original fiction.

Never let anyone tell you that something is ‘just a dream’ – dreams really can come true!